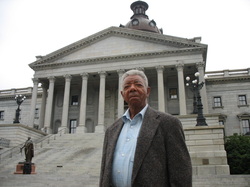 
A SENATE RESOLUTIONTO EXPRESS THE APPRECIATION OF THE SOUTH CAROLINA SENATE FOR THE OUTSTANDING CITIZENSHIP OF MR. PROCTOR BRIGHT, OF RIDGELAND, AND TO WISH HIM MUCH JOY AND FULFILLMENT IN YEARS TO COME.

Whereas, it is with great pleasure that the South Carolina Senate recognizes individuals who are dedicated to giving their time and energy to exemplary good citizenship; and

Whereas, Mr. Proctor Bright, a respected citizen of Ridgeland for many years, has contributed untold hours of valuable volunteer service to his community and county and is thereby worthy of praise; and

Whereas, born eighty-four years ago in 1923, Mr. Bright began as a poor shop boy, working his way up and ultimately becoming a master mechanic and owner of the oldest continuously operating black company in Jasper County; and

Whereas, long a positive force in the Town of Ridgeland and Jasper County through dedicated service in professional, community, and social organizations, he has worked for the betterment of his community in such capacities as 4-H youth leader, teacher of mechanics and welding for Jasper High School, and board member for Live Oak Hospital and Jasper County; and

Whereas, still actively involved in life, Mr. Proctor Bright has served as Grand Marshall of the Dr. Martin Luther King, Jr., Parade and has become an accomplished author during his golden years, having been honored by the Lieutenant Governor's Office on Aging with an appointment to teach other seniors how to tell their personal stories and become published authors; and

Whereas, as a skilled musician, he volunteers his talents at the Ridgeland Nursing Home and local churches and has in many other ways been salt and light for the Lord to his community, serving his church as Sunday School teacher, deacon, and choir member; and

Whereas, having a patriotic heart, as well as a God-honoring one, Proctor Bright answered the call of his country to serve in the armed forces and was awarded the Bronze Star in recognition of that sacrificial service; and

Whereas, Mr. Bright, an exceptional and generous fisherman, has also proven himself a good friend to the people of his town in demonstrating wise conservation and management of the land he loves; and

Whereas, he married his beloved wife, Dora, in 1942 and was a devoted husband to her until the Lord took her home; he remains a kind, loved, and esteemed father, grandfather, and great-grandfather. Now, therefore,

Be it resolved by the Senate:

That the members of the South Carolina Senate, by this resolution, express their appreciation for the outstanding citizenship of Mr. Proctor Bright, of Ridgeland, and wish him much joy and fulfillment in years to come.

Be it further resolved that a copy of this resolution be forwarded to Mr. Proctor Bright.

Presented by Senator Clemente Pinckney, and the fine citizens of Jasper County, on March 29, 2007.