By Proctor Bright & Mary A. Bright

One Sweet Day (Excerpt ~ Whistle for the Wind) 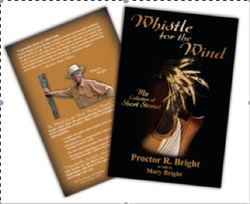 By Proctor Bright & Mary A. Bright
It was a beautiful crisp August Saturday in 1937. The air was so clean and cool; I figured God was showing off. I was headed to town about one mile away with my Uncle Cuyler, who was only a couple of years older than me. My dad was the eldest of thirteen children, and Cuyler was the youngest of my daddy's brothers, so we were always together. That also meant that Cuyler's mother was my grandmother, and that meant sharing Sunday dinners and evening campfires.

Cuyler was always teasing and making everybody laugh. He could walk in from what had been the saddest funeral ever and start his antics. He would have the bereaved cracking their sides in just a few moments. His ability to remember and recall was amazing. He could remember dates, history facts, and knew current events. He was really smart like that. Cuyler could also remember in detail the dumbest thing anyone else had ever done. There were a few times that he received a bloody nose for it, but not from me. He and I got along really well, and I always looked forward to hanging around with him.

And me? I wasn't too worried about anything. I was a pretty "happy-go-lucky" guy. That Saturday I put on a pair of dungaree overalls and a decent shirt. No shoes, as usual. I owned one pair of shoes, so I was careful to wear them only when it was extremely necessary. The rough hard ground and my feet were good friends, and I actually made better time without the bothersome shoes. Just a country boy.

At almost fifteen, my 120 pounds was the definition of "tall lanky frame". All was needed was my picture right beside it in the dictionary. 1t appeared to others (from occasional comments) that they felt my nose, let's say, "overly-endowed" my slim face. I guess they were entitled to their opinion (and mistakes, as well.) Fine feathery lines of hair had begun to paint my top lip, and my voice was squeaky and very unpredictable. But I was unstoppable.

Besides, this was no ordinary Saturday. This was "Convention Saturday". Every August for three or four days, the Mount Carmel Baptists would have convention. They still have it to this day. Many churches in a seventy or eighty mile radius would all meet at a chosen location during that week. It was an honor to be the host church because of all the fanfare, and the opportunity seldom came. It was also a time for the congregation to proudly display new pews, windows, and other improvements. It was just a good time.

The convention was like a huge family reunion of sorts with people you felt kin to, even if you weren't. Everywhere there were handshakes, hugs, and kisses. There was always someone offering a cold drink or a piece of cake.

That year convention was held in Ridgeland, South Carolina, at Lovely Hill Baptist Church, not very far from where I lived. Letters that took days and days to get to their destinations were sent in plenty of time for everybody to get the message. Everybody got ready. Often the host church was chosen the year before, and preparations were started from that day. Even extra outhouses were built to cover the heavy use.

All kinds of food were served at convention. Donated rice, fresh okra, tomatoes, corn, livestock and fish were all frequently on the menu. The hogs were prepared as early as January or during hog butcherin' season to have that smoked flavor. Usually teams of fathers, brothers, and sons organized to cast for fish and shrimp. Wives, daughters, and sisters made assembly lines to clean, season, and cook the bounty. Everybody pitched in and was needed to help with everything from gathering wood for the huge outdoor pots to baking biscuits fifty at a time. Often during convention, the cooking lasted long into the night and the flavor of hickory smoke meat would almost lift you up and tote you off. Days of preachin', prayin', shoutin', and feastin' made everyone come, even the sinners. The work was made easy with the singing and telling of jokes and stories.

Many of the fancy dresses were made on a foot pedal type of sewing machine, or by hand. Months of mail ordering fabric and trading out eggs and produce for buttons and thread fashioned dolled-up ladies with the hats that match.

Church members, neighbors, and friends opened their doors to travelers needing a place to stay. The air was filled with the feeling of thanksgiving. It was thrilling to see so many people in one place having such a good time.

The placid scenes of those evenings were etched into my mind forever. The red and orange fall sunset made the sun appear to smile and tip its hat as it slipped past the horizon. At dusk, smoke from the outdoor cooking looked like candles glowing against a velvety sky.

Children dotted freely laughing and playing, without a care in the world. Everybody looked out for all of the children; that's how it was. Every child was expected to say, "Yes ma'am" or "Yes sir", "No ma'am" or "No sir". The grown folks always seemed to have some little saying to make children behave. "Manners will carry you where money won't walk." "A hard head will make a soft behind." Occasionally other words were used in place of "behind". But the lessons were driven home and made crystal clear. A child's backside was fair game for almost any adult. Most adults preferred the "ole ear-wringing" in public.

Women huddled in small bunches; men in their own little groups, huggin, grinnin', and greetin' each other. Folk complimented each other on how good they were lookin', babies oogled and aggled, pregnant tummies were patted and analyzed, and old stories were told again and again. In the evenings the old Negro spirituals soothingly floated on the warm night air. It was calming.

That day Cuyler and I had on regular clothes, but we weren't worried. See, we didn't go there to attend the numerous church services. We went to people watch. Ok, I will admit that we really went to get a free plate of the best food around. There I said it! Our plan was to stand kinda far off until nearly everyone had been served. Didn't want to be selfish! Then we were going to swoop down and get in the line; smile at the weary women filling the plates with goodness who would rather heap the leftovers on our plates than have to cover them up. Aahhh, it was a perfect plan for two hungry teenage boys.

The easy breeze floated voices, giggles, and the smell of food our way. Creamy macaroni and cheese, fluffy rice, golden fried chicken, baked ham, potato salad, "cat-head" biscuits (called that because of the smooth shiny dough), chicken and dumplings, and thick brown gravy. Combine that with turkey and dressing, ham hocks and collard greens, fried pork chops, sweet potato pie, and cakes so light that they almost had to be tied down on the table. In-tox-i-ca-ting!

In the distance Cuyler and I stood poised waiting to pounce like two young lions. Then unprovoked and totally without warning, my eyes beheld something so beautiful, it stopped time. My fingers gripped the tree as though I was falling. I could barely breathe. I held completely still. I was trapped; captured like a helpless animal in the jaws of a steel trap.

Cuyler who noticed my sudden silence followed the path of my eyes to what had my attention. There she was. Standing like a petite doll was this girl. She was wearing the most beautiful lemon colored dress, tailored to fit the most wonderful creature I had ever laid eyes on. Her soft honey colored skin seemed to glow. There she was standing behind a long table next to a line of other servers. A long silver spoon was clutched tightly in her hand, and it looked as long as her arm. She was perfect!

All I could figure was that God did some more showing off that day. Her size and shape were perfect, too. Her coy little smile was contagious even at a distance. Mesmerized, and hypnotized, I just stood there, unable to talk, unable to walk, unable to think, still unable to breathe!  The last of the line was ambling through, but I didn't bat a lash. I studied her like the best subject in school.

"C'mon Proc, les' go and git in line," Cuyler urged. "They gonna put all the food up to 'reckly 'cause the servin' most finished."

But still I couldn't move. A look of relief covered her angelic face as she plopped the huge spoon on the table and touched her forehead with her apron. What a girl! Varoom! Varoom! My heart was doing ninety miles an hour while my body was in neutral. There must have been more than a thousand people in that church yard just a minute before, but now there was only one.

There was a war brewing in me that rivaled any war in history. Part of me wanted so badly to go right up to her and introduce myself (as her future husband, of course), and the rest of me wanted to run home like a whipped puppy.

I finally exhaled and quietly breathed in, "You see that girl over there? That's going to be my wife." The words escaped from my mouth before I could help myself. How could I have forgotten in my moment of weakness that Cuyler was the world's biggest tease? His response?

"No it ain't, Proctor, that's gonna' be my wife," and he broke out in a knee-slapping laugh.

I could have jumped him, but I knew I would not live down this story in just one weekend. Somehow, I didn't care.

I never did have the courage that day to get in the food line, knowing that I would actually come face to face with her. What would I say? Did I mention that I stuttered terribly whenever I was nervous? And I was nervous!

I left the convention not having a clue as to who this mystery girl was. I didn't know her people, her friends, or her name, or where in the world she lived. Pretty bleak.

I went home, in love. I didn't want to do anything, but think of her. Over and over, I played the tape in my head of seeing her for the first time.

I went from church to church every Sunday for a whole year. Sunday after Sunday, week after week, I tried to match that indelible picture seared across my brain to her name. She became, in my heart, the princess in the lemon yellow dress.

My folks were so happy that they told everybody that I had a touch from the Lord, and that I was saved, sanctified, and on my way to glory. They should have known something was fishy. The whole time I was in church I sat there looking around as guilty as if I had stolen the collection plate. Little did they know what or who I was looking for.

As for Cuyler? He teased me each and every day, because I said she was going to be my wife. Oh well.
I had to find that girl!


Copyright ~All rights reserved.
No part of this publication may be reproduced without express written consent of the publisher.